Originally planned to post this morning, but the internet connection was cut by Comcast again. No big deal to me. No internet means more knitting time. But first I have to thank you all for the birthday wishes for the blog. At first when I started it, I thought perhaps it would only last a few months. Now of course, as some of you said, I wish there are many many to come.

Haven't had an FO for quite some time. As much as I'd like to finish up Bomber, I am still at the mercy of USPS. The zipper did arrive last week ... but it was a closed-end one! Turned out it was a mistake by the shop. But Jeff of Zipperstop had been very helpful and responsive to my enquiry. The correct zipper should be on its way here ... but you know, Christmas time. Perhaps Bomber would be my first FO in 2006 ... ha!

Progress on Urban Aran is good, though not as fast as I expect since I have also been absorbed in the reading of Jan Burke's novels. I haven't been so much engrossed with a writer for quite some time. The last one would be Patricia Cornwell, and Val McDermid before that. The last Cornwell book I read had been sloppy and disappointing to me. I hope the latest one would restore my liking for her. But I digressed. The body pieces for Urban Aran were finished last night and here is a lousy picture: 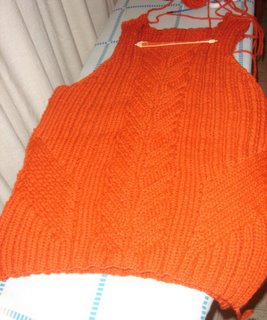 With the aid of safety pins, I tried them on last night and thought that it would fit just right after some blocking. I am now half way through the sleeves (knitting both at the same time). Guess this would be in time for the new year. :)
Posted by Agnes at 6:17 PM

The Urban is cranking along...it's very pretty. Good luck with the zipper and happy belated blogaversery!!!! Oh...and happy holidays too!

That urban aran is so lovely Agnes! You know we love orange around here!

I've only seen that sweater once before and it was orange too...great color choice!

I hope you and Hubster have a wonderful holiday!!

The urban aran is looking great! I hope your zipper arrives soon.

It looks beautiful! I did both sleeves on circulars and I thought it was easier than one at a time.
Connie

It looks fantastic!! Beautiful job. Wishing you and yours a wonderful holiday...take care and Merry Christmas to you, Agnes! :-)

just stopping by to wish you and your family happy xmas